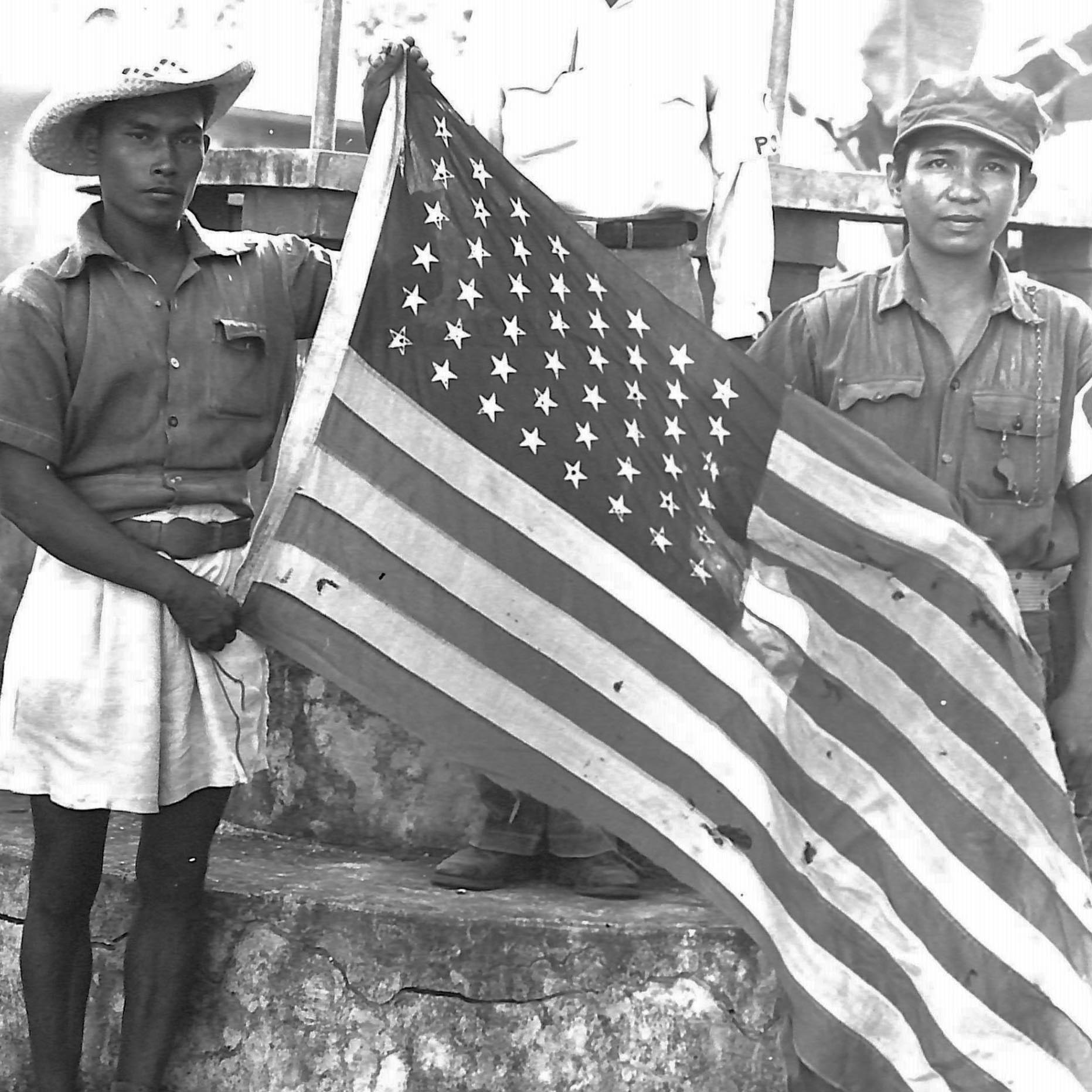 A declassified questionnaire with a Filipino guerrilla leads to an examination of the historical importance of the little-known “Guerrilla Roster” from the Philippines in World War II.

Among the most important and fascinating historical documents from World War II is the roster of Filipino guerrillas. Because it was classified for almost 75 years, the Guerrilla Roster is little known by most Americans, but it’s a key part of the story of the war in the Philippines and the fight for justice and equity for Filipino veterans.

As many as 260,000 Filipinos served as guerrillas during World War II. Some served in large and well-organized forces that functioned like armies and stayed in close contact with America’s temporary headquarters in Australia. Such units included Filipinos trained by the U.S. armed forces and American soldiers who stayed behind. Others built guerrilla movements from the grassroots. They had little experience and few connections to the U.S. military, but they mobilized peasants’ discontent toward their landlords and drew on the long tradition of Filipino nationalism that dated back to the revolution of the 1890s. Many sought revenge against Japanese occupiers for their atrocities against Filipino civilians. Some units allowed women to serve; many women served as nurses and filled other crucial non-combatant roles, though Filipina women did serve in combat roles, and at a higher rate than in many other theaters of the war. General MacArthur, from his command in Australia, declared that members of the organized guerrilla groups were part of the United States Armed Forces of the Far East (USAFFE). The status of outlaw guerrilla groups was less clear.

In June 1945, after the liberation of the Philippines, the Americans established the “Recovered Personnel Division” (RDP) to locate, recover and take care of U.S. and other Allied military and civilian personnel who had been captured by the Japanese. The RDP was also tasked with gathering personal information on civilians employed by the Army during the war, guerrillas and POWs. The RDP’s records would be key to determining who had served in the war, and therefore who was owed pay, pensions and other benefits. They were also often the only records of Filipina women’s service in the war effort.

The RDP records, especially those concerning guerrillas, are fascinating. Typically U.S. military records were much more organized, but the nature of the conflict in the Philippines, where most of the trained American military withdrew, leaving behind POWs and guerrilla fighters, meant that wartime records had to be assembled after-the-fact. Documents produced during the war indicate the wartime paper shortage: records were often recorded on brown paper bags or on the backs of letters, sales receipts, court documents, and food labels. More than 350,000 people, civilians and guerrillas, were interviewed by the RDP after the war. The Philippine Archives Collection, now housed at the U.S. National Archives, totals 1,665 boxes.

In 1949, the U.S. classified the guerrilla roster. This meant that the thousands of Filipino men and women who fought with the guerrillas had no documentation of their service. Further, it meant it was impossible for these veterans to claim benefits. It was only in 2009, after the Filipino Veterans Equity Compensation Fund was established, that the guerrilla roster was declassified. Retired Major General Antonio Taguba was key to the effort to release these records, pressing the Army and the V.A. for documents that would help veterans prove their eligibility for compensation.

In 2015, the government of the Philippines sent a team of archivists to the United States to digitize the collections; due to time and financial constraints, they only digitized the Guerrilla Roster (about 270 boxes and 270,000 documents). These digital records were posted online by the Philippine military, so that veterans and descendants based in the Philippines don’t have to travel to Washington, D.C. to find these important service records. The digitized collection can be found here.

Note: “Roster” is sort of a misleading term; it sounds as if there’s one long list of all people who fought as guerrillas, when in fact there are thousands of pages, corresponding to hundreds of units. The roster includes lists of those who served, questionnaires with guerrillas, histories of each unit’s wartime service, and U.S. Army personnel’s recommendations for whether or not to recognize the service of the units.

After the war, the U.S. military set about collecting records of wartime service in the Philippines. Between 1945 and 1949, they interviewed approximately 350,000 people, the vast majority of them guerrillas. The records include lists of guerrillas, questionnaires, short histories of guerrilla units’ wartime experiences, and Army personnel’s recommendations about whether or not to recognize each unit’s service. The records were classified in 1949 and remained so until 2009, when they were declassified so that Filipino veterans could prove their eligibility for payments from the Filipino Veterans Equity Compensation Fund. This is one such record from the vast Guerrilla Roster. 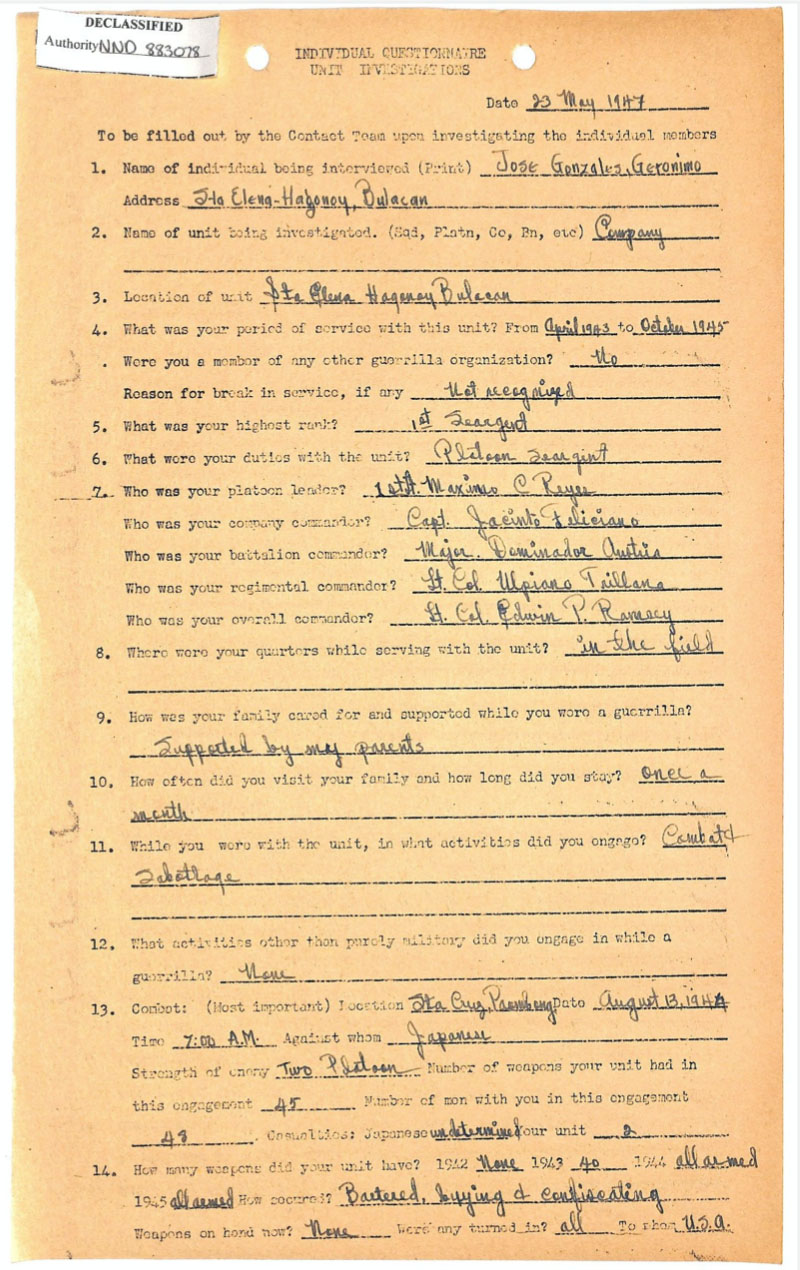 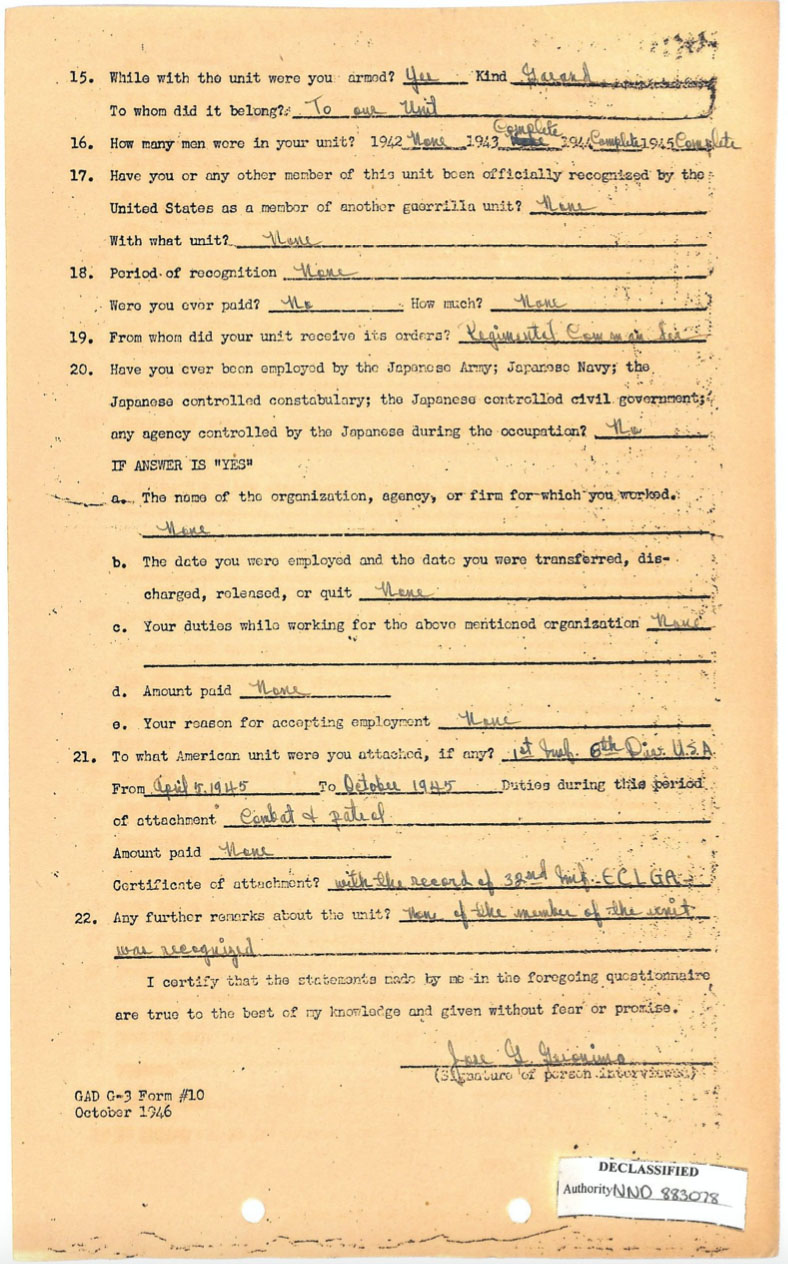