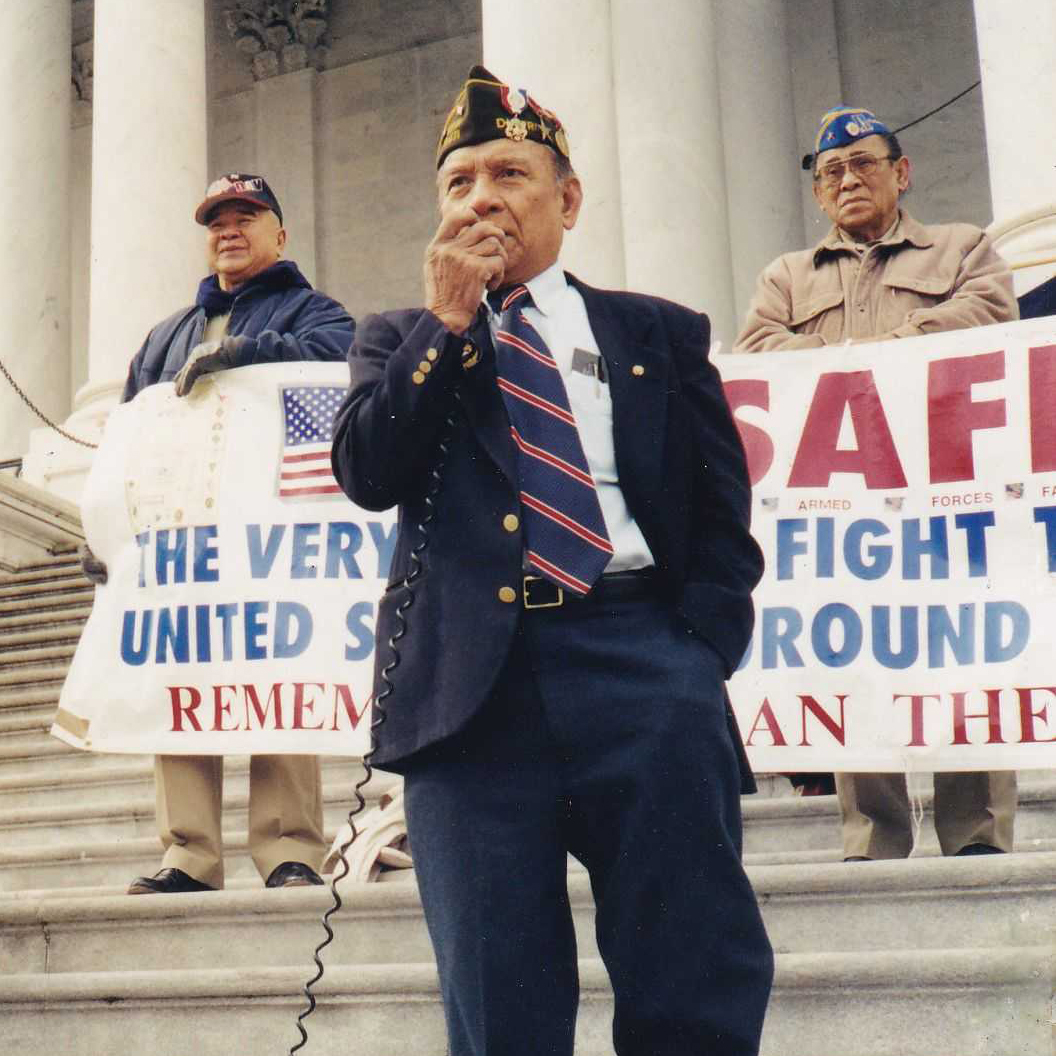 An oral history interview with an activist in the struggle for Filipino veterans’ benefits, reflecting on how he got involved and what kept him motivated.

Jonathan Melegrito, the son of a Filipino veteran, immigrated to the United States with his family after the passage of the 1965 Immigration Act. As a young man, he got involved with the ex-pat Filipino community who were protesting the Marcos dictatorship in the Philippines. From there, he met Filipino veterans and learned about their struggle for equity and justice. In his oral history interview, he talks about how he got involved in the Filipino veteran movement, what motivates him as an activist, and how he worked with students to get them involved in the cause. He also discusses how being from a colonized country affects your sense of self-worth and attitudes towards America, and how learning “the real history” changed his own sense of identity.

When Jonathan first got involved, Filipino veterans had already been trying to obtain their benefits for more than 20 years. Veterans in the Philippines petitioned the government of their newly independent nation to do something. “Uncle Sam Has Forsaken Us,” read the placards of protestors who marched on the U.S. Embassy in Manila. Veterans in the United States filed court cases and asked Congress to pass legislation.

Inspired by the courtroom successes of the civil rights movement, veterans began to file lawsuits in U.S. federal courts in the 1970s. One series of cases focused on the INS’ withdrawal of the only naturalization officer in Manila immediately after the war. Filipino veterans argued that this was a direct effort to deny them any chance to file the paperwork and take the oath necessary to become a U.S. citizen. Another lawsuit tried to convince the courts that excluding Filipinos from veterans benefits was a form of racial discrimination. On several occasions, the veterans convinced some judges of the justice of their cause, but they lost almost all of their cases. More than once, they took their case all the way to the Supreme Court. The Court ruled against them for the last time in INS v. Pangilinan (1988). This strategy had reached a dead end.

Veterans turned to Congress to change the laws, targeting the Rescission Act most of all. As the Filipino-American community grew following the passage of the 1965 Immigration Act, the movement for Filipino veterans did too. A younger generation, born after the war and inspired by the social justice movements of the 1960s, started working with older veterans. They adopted a strategy that included educating and lobbying members of Congress while using more confrontational non-violent civil disobedience outside the Capitol: marches, sit-ins, picketing and protests.

Throughout this long period, many veterans died while waiting for recognition and benefits. As the World War II generation aged, activists’ urgency grew. This sense of the window closing accounts for the change to more confrontational grassroots politics by the 1990s, as well as the fact that earlier strategies had not worked.

Activists’ efforts began to bear fruit, though their victories were incomplete and took many years. Immigration laws passed in the 1980s and 1990s finally allowed Filipino veterans to naturalize as U.S. citizens. In 2009, as part of the omnibus stimulus bill passed by President Obama, Senator Daniel Inouye, a Japanese American veteran who had long been a champion of Filipino veterans, succeeded in earmarking funds that would provide modest one-time payments to living Filipino veterans.

Jonathan Melegrito, the son of a Filipino veteran, immigrated to the United States with his family after the passage of the 1965 Immigration Act. As a young man, he got involved with the ex-pat Filipino community who were protesting the Marcos dictatorship in the Philippines. From there, he met Filipino veterans and learned about their struggle for equity and justice. In this oral history interview, Melegrito talks about how he got involved in the Filipino veteran movement, what motivates him as an activist, and how he worked with students to get them involved in the cause. This transcript has been edited for length and clarity. Watch the interview here.

Melegrito: I became an activist in the 1970s. And that was a time when the Marcos dictatorship was ruling the country. [I joined a] group of militant activists in Washington DC. My involvement encouraged me to be conscious of the other civil rights issues that were being addressed, the Vietnam War, the civil rights movement. When I look back I appreciate being involved in this movement because it raised my consciousness eventually about the equity and the justice struggle [for Filipino veterans].

When I came to Washington [in the late 1960s] after graduating college I discovered that there were veterans living in Washington D.C. There were probably about two dozen of them. And I was really moved by the fact that these are veterans in their sixties and seventies, marching the halls of Congress, visiting their representatives, demonstrating under the noonday sun. Even when it’s raining or snowing they’re out there. When I see these aging veterans, some of them in crutches, some of them in wheelchairs, walking the halls of Congress, lobbying for bills that they know were impossible to grant… Despite their age they somehow managed to continue fighting, that really touched me and it made me even more determined to be part of this.

[The aging Filipino veterans] had some leaders who really were very good at organizing coordinating recruiting. I got to meet their leaders. I got to know them personally, [I] went with them joined them in pickets and demonstrations, invited into our homes for dinner. So it became so like a family relationship that we developed and nurtured over the years and you can very close to them we treated them like our fathers like our uncles and grandfathers.

Interviewer: Can you describe the ways in which you helped rally the younger generations to also get involved in this cause?

Melegrito: It was very encouraging to share my own personal story because that’s what moves these students. When they learn that their grandparents are uncles were treated this way, it became personal. There were no longer just numbers that they read in the newspapers. Those were statistics. And if you just learn them in school as a statistics, it doesn’t move you. But when you begin to be confronted with the human dimensions of these people, Filipinos, who march and died and served [it starts] getting close and personal. And I think that’s what really really got into their guts, and made them realize it’s a matter of honor for us as well.

If you’re a student of history then you begin to see, the root of all this. [The] history of being colonized has a very adverse effect on the way we think of ourselves. It affected our sense of pride [and it created a] sense of inferiority. But when you realize that it’s not because you’re a damaged culture or because you are naturally inferior, [that colonization] was a cause of this. Then you begin to see the big picture. And that’s what happened to these students. They woke up.

Today when you look at what’s being studied in schools there’s hardly ever any mention of that dark part in history. It’s all made to look like America did this wonderful thing, liberated the Philippines from the Japanese. So you’re always constantly grateful to America because, “Hey, we were liberated.” We were freed but they never tell you the rest of the story, which is the real story. And when you grasp that history, then you [are] moved to action.

[George Washington University students who heard my story] were among the first when we had that reenactment march in front of the White House in August 1997. It was a very inspiring scene to see them chanting, waving banners, calling for justice and equity for the veterans, marching side by side with them, getting arrested with them. That began a movement that then spilled over in other campuses all over the country… All I did was [tell students], “Make them confront the reality that these are not just numbers reported in newspapers or history books. These are your grandparents. These are your Filipino brothers and sisters who fought in the war.”

The long years of fighting in the trenches, demonstrating, educating ,organizing, mobilizing, visiting Congress, it illustrates the power of the people when they are committed to fight for what is right. Congress responds when the people tell them what to do… It took more than 40 years for us, the people to move these otherwise cold and indifferent politicians to do something. I think it’s a lesson. Anytime there is a cause that is worth fighting for, if you don’t speak up, if you don’t organize, and you don’t let Congress know loud and clear that what they are doing is wrong, nothing’s ever going to happen. And we made it happen.