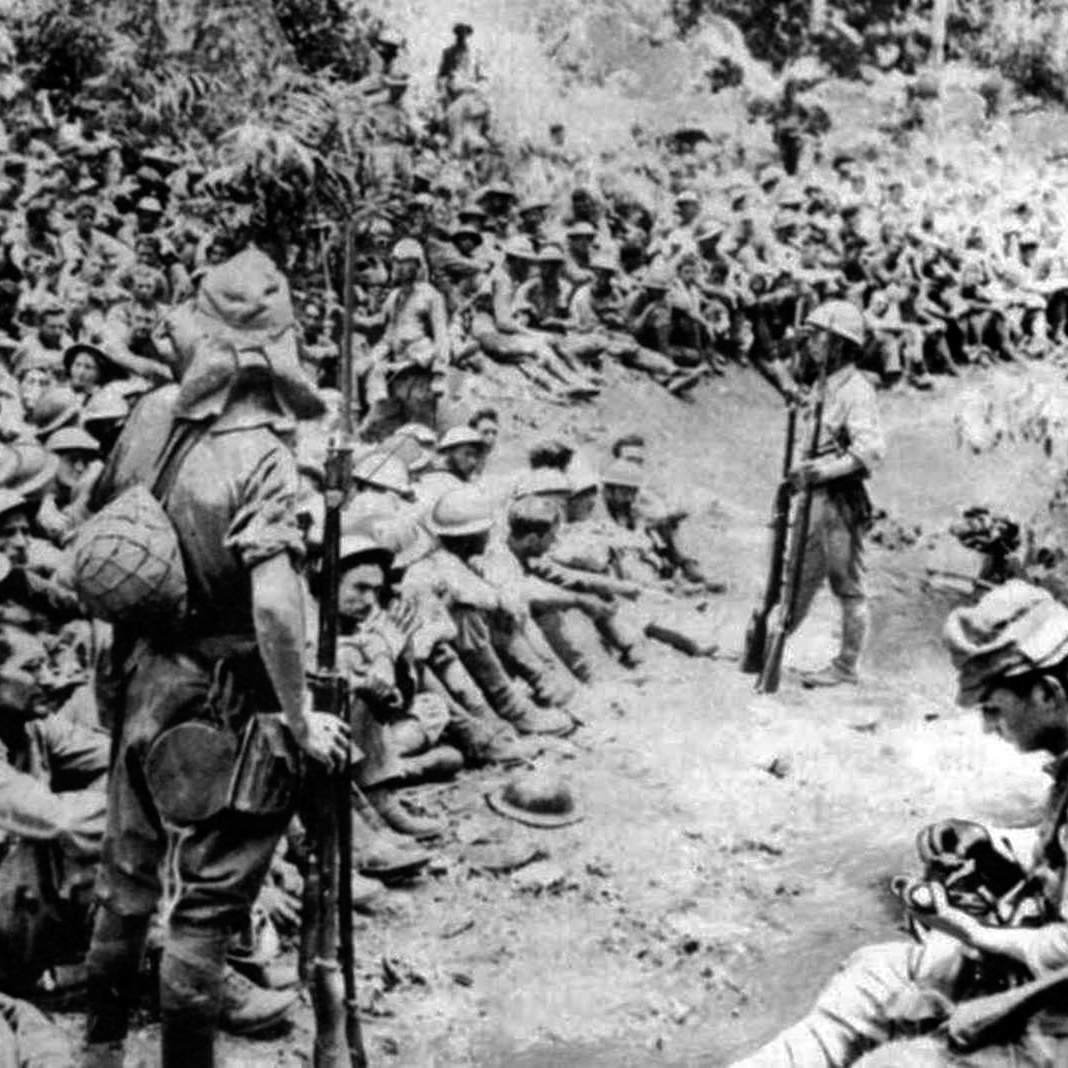 An analysis of an excerpt from the diary of a Bataan Death March survivor.

At the same time as the Japanese attacked Pearl Harbor, they also bombed U.S. airfields in the Philippines. Shortly thereafter, they invaded the Philippines. With no hope of reinforcements arriving (the U.S. Pacific fleet, after all, had been destroyed), the Philippines weren’t expected to hold out long. General Douglas MacArthur declared Manila an “open city” to protect its civilians, while USAFFE forces began a “fighting retreat” to fortified positions on the Bataan Peninsula. General MacArthur and Commonwealth President Manuel Quezon withdrew in late February 1942, with MacArthur famously declaring, “I shall return.” USAFFE forces held out longer than anyone expected, with U.S. forces surrendering on April 9. It was one of the worst defeats in U.S. history.

Beginning on April 10, 76,000 men—64,000 of them Filipinos—began a forced march to a military prison more than 70 miles away. The men faced heat, dust, thirst, and disease. They endured mistreatment at the hands of their captors. But along with endurance, there were moments of bravery and kindness. Risking execution, some soldiers escaped the march, hopeful they could hide out or form new guerrilla units to await U.S. reinvasion.

Filipino villagers who lived along the route risked their lives to offer food and water to men along the march. At Bataan, Filipinos and Americans who had served side by side under the same flag and under the same commander, now marched together, making the same sacrifices.

Six grueling days later, Filipino and American troops reached their final destination at Camp O’Donnell. They were exhausted, ill, and defeated. Between 7,000 and 10,000 had died along the way, and some 16,000 more soldiers died in the first two months at the camp.

The Japanese carefully documented the Bataan Death March; images of defeated American soldiers were powerful propaganda. Americans also used the march to rally support for the war, dwelling on Japanese mistreatment of American prisoners in newsreels, posters, and other media. In both cases, the focus remained on the treatment of white Americans, obscuring the fact that the vast majority of prisoners were Filipinos, as were the majority of casualties.

The Bataan Death March was a brutal six-day forced march of 76,000 men—64,000 of them Filipinos—after American forces surrendered to the Japanese on April 9, 1942. Having fought the Japanese since December, most of the men on the march were already exhausted and malnourished when it started. The grueling pace and vicious treatment by Japanese soldiers, who viewed surrender as dishonorable, proved deadly for the prisoners of war. Between 7,000 and 10,000 USAFFE soldiers died during the march, and another 16,000 perished in the first two months at the prisoner camp. Filipino civilians risked their lives to provide food and water to the prisoners; some American and Filipino soldiers were able to escape and join guerrillas.

The following excerpt is from the wartime diary of Felipe Buencamino III, recounting his experience on the Bataan Death March and as a prisoner of war at Camp O’Donnell.

Everywhere victims of catastrophe filled the roadside. Mobs of pitiful figures pleaded for food, begged for water. As we walked on and on and on… I saw more and more desperate-looking faces… smoke-blackened faces… some had bandaged heads and limbs. Then Japanese soldiers would come and start kicking them and having fun at the expense of the wounded soldiers. They would offer water then drop it before them. One man was shot for stealing rice from a parked Jap truck. Thousands slept on the roadside… right in the open… using their little bundles of worldly goods for pillows, and rags and paper for bedding. In every lane, suffering humanity squatted, stood, or lay wherever space was. I thought why don’t Vargas and our leaders do something to help these soldiers? I could not understand. Where were our social workers?

I kept on praying while I walked. More and more of the Japanese troops passed by. We avoided them. More soldiers dropped down out of sheer exhaustion. Ernie and Ramon were going crazy. They had no more water. They kept on looking and looking and asking and asking for water, water, water. They were thirsty, very thirsty. Willie Jacinto was saying “water-water-water” at every step. The routine was breaking my nerves. I shouted at Willie… told him to “Shut up!” He did… and I cried. Then we saw a canal. Instinctively… we all dove into it. there was the dead body of a Negro floating in the stagnant water. But we drank it… and it was good. I took a precaution. I poured a little bit of iodine in my cup. Never did I like my drink more.

Afternoon came… and we rested under a tree. Here, three Americans joined us. One of them –a major– told Ramon: “Say you… move out of there… so I can get the shade.” Ramon didn’t like the way the American said it. The major forgot that the war was over for us at least… and that we were now equal. Ramon got sore, shouted: “I take no orders from American cowards.” The major reddened. “You talk of equality… but when I was in your country… despite my money… I couldn’t dance with your girls.” The American said: “That’s what you give us after fighting for you!” “Whattha hell!” said Tony. “Who’s fighting for whom?” “Why you mutts never even went near the front?” We left after a few minutes.

The Japanese commander arrived. He stood on the platform with an air of arrogance. He said: “I am Capt. Shineyosi. I am head of this camp. If you have no behave, you will be killed. Why you fight Japan? She is your friend. She wants to free the suffering people of Asia. The Asiatics have long been oppressed by the Whites. Now the whiles will be made to suffer…” And at this point, he made a dramatic gesture and pointed at the American prisoners on the other side of the fence. There were the Americans, bent. They were carrying pails of water… fixing the road… building fences. They were being kicked, butt-struck, bayoneted. I saw an old American being carried by two young bearded aviators. I saw many falling down out of sheer exhaustion. I saw Japanese faces laughing at them… kicking and hitting them. I couldn’t help but pity them… although my heart was bitter at the way Americans discriminated racially against Filipinos. These men were not entirely to blame. They were brought up in a stupid atmosphere that made them believe they were superior to the brown man. But there they were–kicked, hit by brown men. It was a picture of racial vindication… but it was also a picture of the heartlessness of war. Why should these few men… be the ones to endure the stupidities of centuries?

Source: Diary of Felipe Buencamino III, 10 April 1942. Felipe’s diary was transcribed and published in the mid-1960s and published digitally by The Philippine Diary Project.